As the days get longer and the weather turns sunnier there are several options to get out and have fun in Lynnwood.  We previously wrote about the Interurban Trail, which runs through Lynnwood, but that is not the only way to enjoy the outdoors.  In addition to the trail, Lynnwood also has several parks.  We will profile these parks in this and other upcoming articles.

Stadler Ridge Park is a relatively new city park, opening in 2013.  The park is named after the Stadler family, one of the earlier families to settle in this part of the later city of Lynnwood.  The park has many features for children and also teenagers.  It is located amid adjoining neighborhood streets. 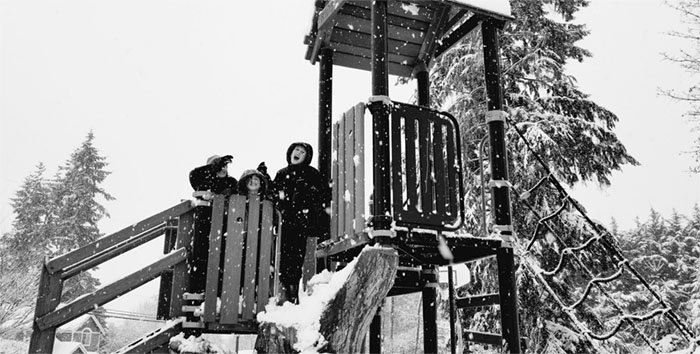 Local kids have fun on the play equipment

Play Equipment – There is a large structure that kids can climb, jump up on and otherwise have fun on.  Several ornamental trees and animals are also on the structure.  In the Winter of 2019-2020 the City renovated the structure.

Slides – A series of slides starting at the higher elevation of the park lets kids enjoy a fun and safe drop in elevation.

Picnic Tables – Did you bring lunch?  You can sit at one of two tables to enjoy a meal.  Clean up by throwing any trash in the available park garbage can.

Half Basketball Court – If you are too big to be running around on the playground, bring the basketball and shoot some hoops with friends.

Open Field – Grass and open space are available in the park’s central portion, just do not plan for a flat surface.  The ground is hilly and descends down to the sidewalk and street.

Wooded Area – There is a smaller area of tall trees and under brush with clear paths throughout.  This can be fun for children and leashed animals out on a walk.

Pathways – There are a few other paths and stairways running to and from the play equipment and other park features.  A larger gravel path also winds down along the park’s southern border (that is especially popular for sledder when we get the occasional snowfall).

Access – There is not a parking lot, but street parking is often available.  Sidewalk runs along the park’s eastern border while on the west there are a series of homes (there is also a paved walkway the public can use to gain access from that direction).

This site uses cookies. By continuing to browse the site, you are agreeing to our use of cookies.

We may request cookies to be set on your device. We use cookies to let us know when you visit our websites, how you interact with us, to enrich your user experience, and to customize your relationship with our website.

Click on the different category headings to find out more. You can also change some of your preferences. Note that blocking some types of cookies may impact your experience on our websites and the services we are able to offer.

These cookies are strictly necessary to provide you with services available through our website and to use some of its features.

Because these cookies are strictly necessary to deliver the website, you cannot refuse them without impacting how our site functions. You can block or delete them by changing your browser settings and force blocking all cookies on this website.

These cookies collect information that is used either in aggregate form to help us understand how our website is being used or how effective our marketing campaigns are, or to help us customize our website and application for you in order to enhance your experience.

If you do not want that we track your visist to our site you can disable tracking in your browser here:

We also use different external services like Google Webfonts, Google Maps and external Video providers. Since these providers may collect personal data like your IP address we allow you to block them here. Please be aware that this might heavily reduce the functionality and appearance of our site. Changes will take effect once you reload the page.